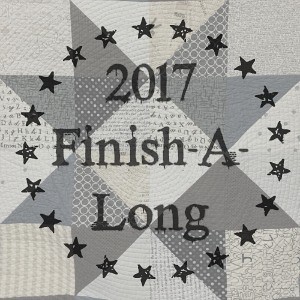 My Q1 List Of Goals
So, the Meadow Quilt by Lizzy House...

As anyone who knows my quilting can tell you, I'm not very good at following instructions.

Yes, the instructions for the quilt indicate that there are twelve quilt blocks but I'm tired of making them, so I'm just going to make eight of the blocks, split them in two, and then do nine-patches for matching quilts.

Of course I can make an open bag out of a closed bag pattern! Don't be silly; it'll be easy!

The Meadow Quilt, designed and taught by Lizzy House, is a 4x5 arrangement of 12.5" 'flower' blocks with coloured-in sections between the flower petals. She teaches it as a class, and I attended the one in Sydney back in 2015...and then left the pattern for forever. In December 2016, I finally decided to get it done (see the hashtag #SelWIPsItGood) and did the cutting and sewing in January, before completing the sewing-together at the first sew-in for the Sydney Mod Squad quilting group. 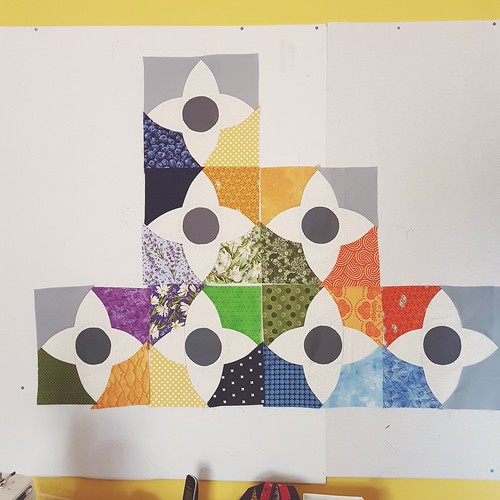 There were issues, of course. The block itself as given by Lizzy involves curves and bias cutting, and then, on top of all that, the pattern doesn't precisely fit. Lizzy's advice was to ease-ease-ease, then starch the living heck out of it. 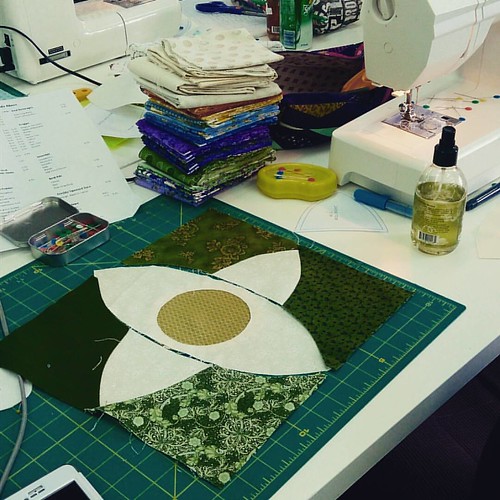 Which I did, but every block I made had a wobble to it. It was a PITA. 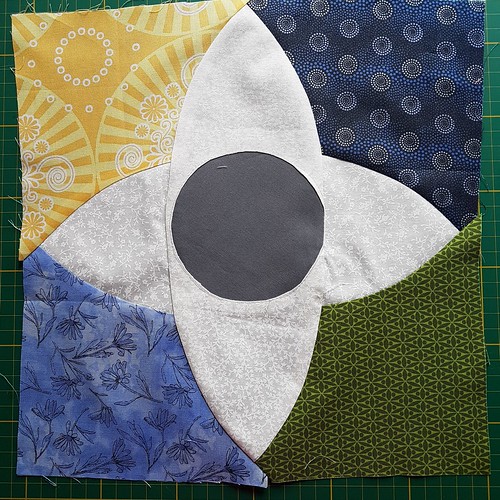 And that was all the blocks! It was so frustrating!

In my despair, I cried out to the quilters on Instagram, and they heard my cry and delivered me to Renee at Quilts of a Feather. Renee had created a fix it tutorial for how to make the blocks lay flat, and reading it was very helpful! Of course, you needed to read the fix before you'do done the cutting out, which was too late for me...

In the end, I squidged the edges, but the fix would be helpful for friends who have the quilt pattern and haven't yet completed one (just like me, only even more delayed).

Then there was the small matter of the layout - as noted, the usual layout is a 4x5 rectangle. Which looks lovely but is kind of...boring. 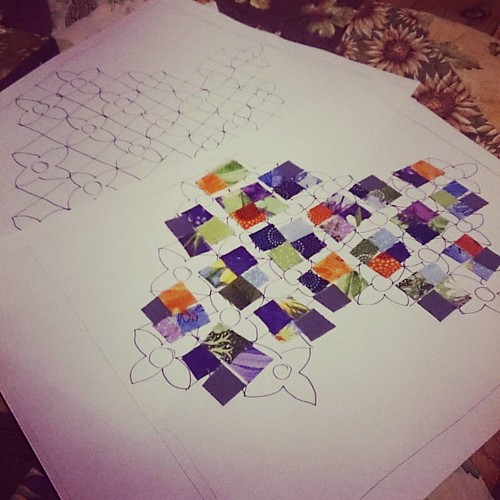 At first, I was going to make the 'colour blocks' between the flower petals different colours, but then I decided that I liked the colour fill, so I rearranged: 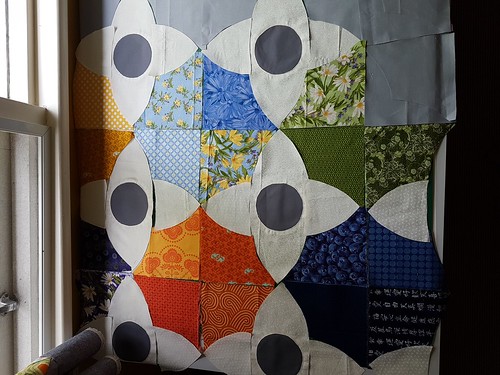 There were issues sewing it all together, of course: 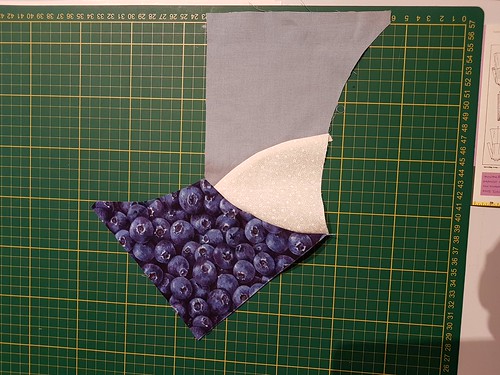 But I had a plan! (In my quilting bullet journal; I'm not a devotee, but it is pretty convenient in many ways.) 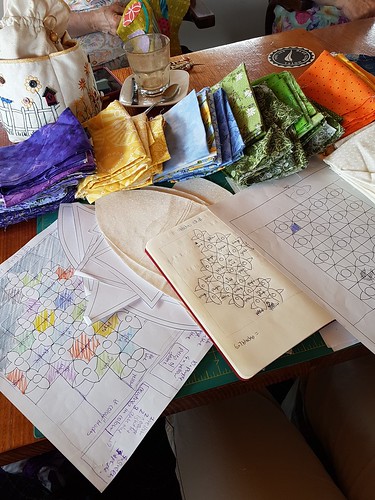 One thing that Lizzy said was that if you make all the 'eyes' (the centre piece of the block) then you'll make the quilt, because those eyes are pretty useless for anything else...and they're watching you. Which, yes, is a little creepy, but accurate. 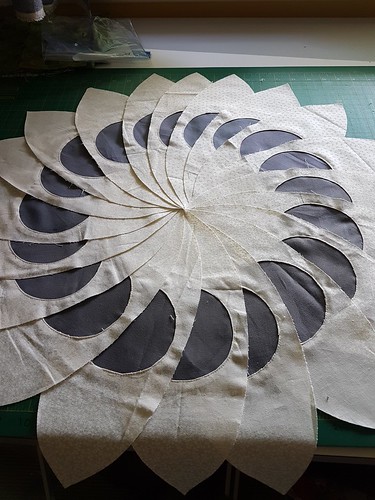 Even once I had all the blocks, there was some residual anguish about putting it all together. This is customary and should always be ignored. My first instincts are usually right when it comes to quilt design - or, at least, everyone is too polite to say my design sense sucks to my face - but the second-guessing takes a toll: 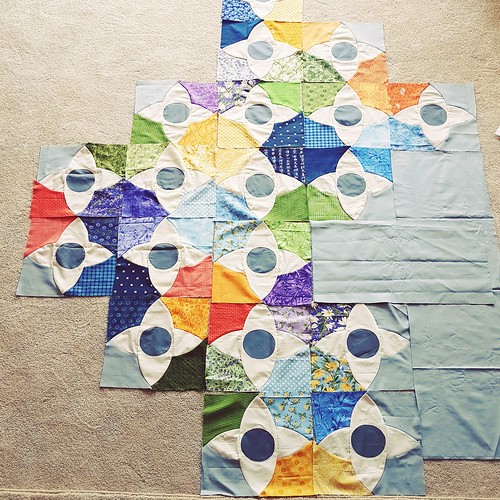 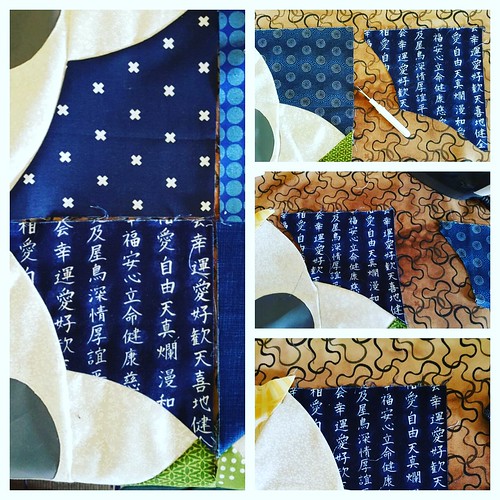 The result is pretty good, though - I like it as much as I thought it would. And although I worried that the three-quarter fills might look a bit out of place, most people seem to like the variation in design, too. 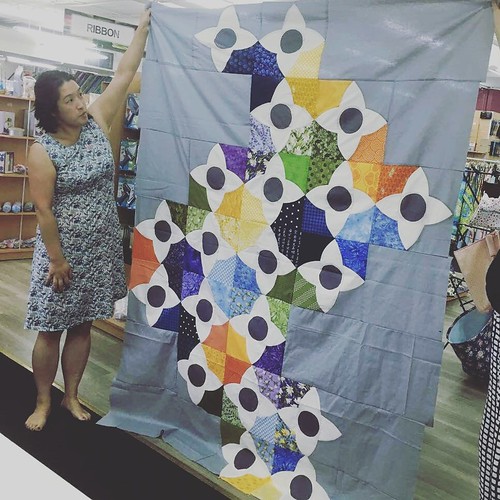 I think this will go as a wedding present to a couple who are getting married this year. I'll have to get it quilted before then, though - luckily, I have quite a bit of time on my hands in the coming months thanks to a work redundancy...

Three things I have on the 'to finish' list - all of them existing WIPs.

There'll be other things done, of course, because this is me and I need to get my butt into gear for the 2017 Sydney Quilt Show (as well as the other shows during the year).

The Lizzy House Meadow Quilt class was a couple of years ago, and I put the pieces away in a box and haven't yet finished it! Time to get it done! 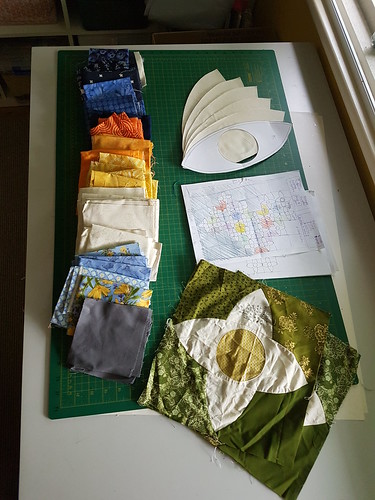 It has the space, it has the place, I just have to get the pieces laid out and sew!

The reason this one has taken so long is that I wanted a larger quilt - a 4x4 quilt rather than a 3x4. I needed to add 4 extra blocks - well, 5 really. I couldn't find the sixth one that my partner sent, and I haven't heard from her since the QAL. Oops. 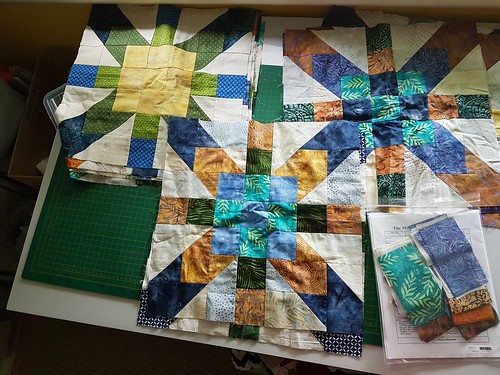 Time to get this one done. Seriously.

In the midst of all this, I also have to make two quilts for the Sydney Quilt Show. And possibly put borders on a 3rd (the Sydney Mod Squad quilting group) depending on whether it's needed or not...