WIP Wednesday: the one with hexies

I spent about half the weekend out in my garden, getting things done. Planting trees and prepping beds and working out what to do about the major major slug problem I have. Ugh, slugs.

On the other hand: BEES! 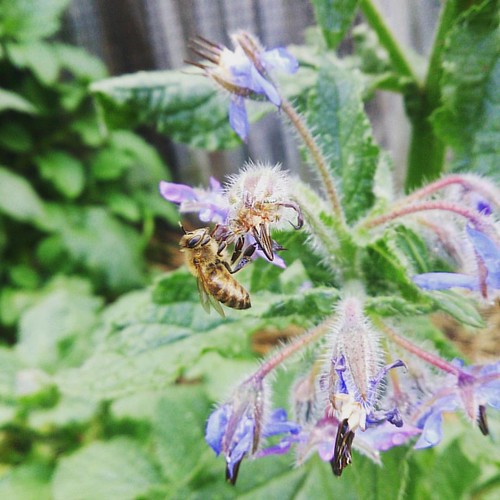 Sewing my fingers off to get these done in time. Once again, last minute saves the day.

So I'm sewing these things everywhere: 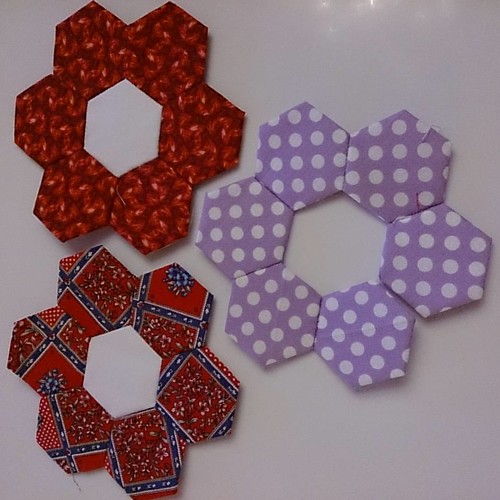 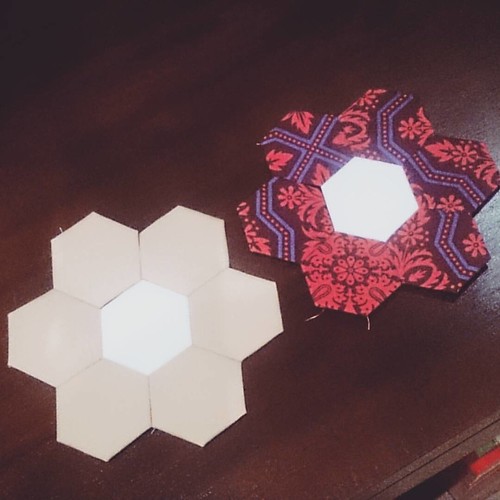 And I do mean everywhere: 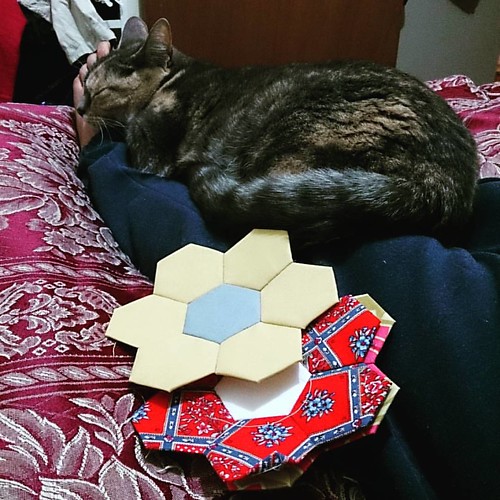 But, boy, am I getting tired of last-minute! And this is why I'm not going to sign up for Round 2. I might just slowly keep sewing a couple of flowers a month and eventually, when I'm old and grey and not actually a granny, I'll have enought for a a grandmother's flower garden quilt. Except I'll still have to sew it all together and...oh dear... 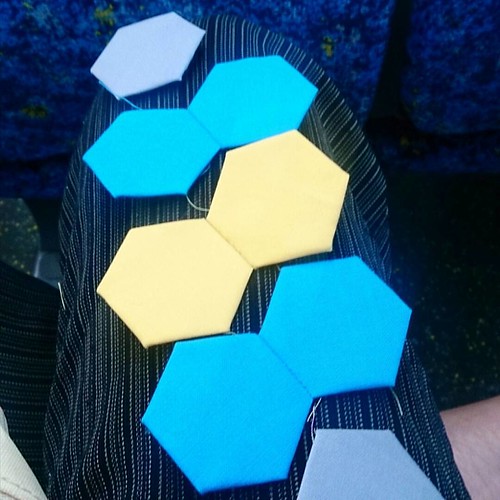 I still had blocks left over after making Not Like The Folks Next Door, so I've managed to use all of them (nearly all of them) in another mini. 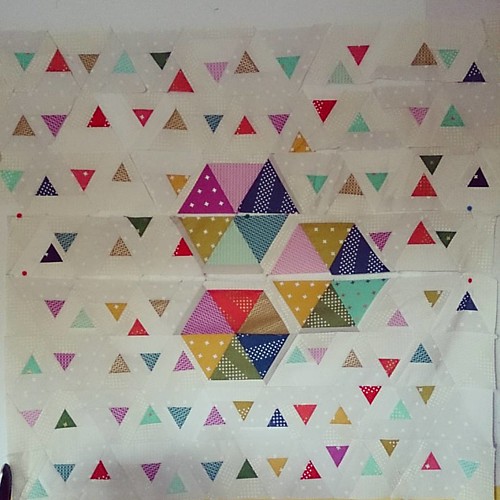 It's more of a lap quilt, really. Or maybe a baby quilt. A baby quilt could work; I owe at least one!

Righty-o: looks like this is destined for the kid who I haven't yet given a gift to.

Honestly, my friends are having babies faster than I can gift things. STAHP! STAHP NAO!

So, I have finally made an effective cat trap: 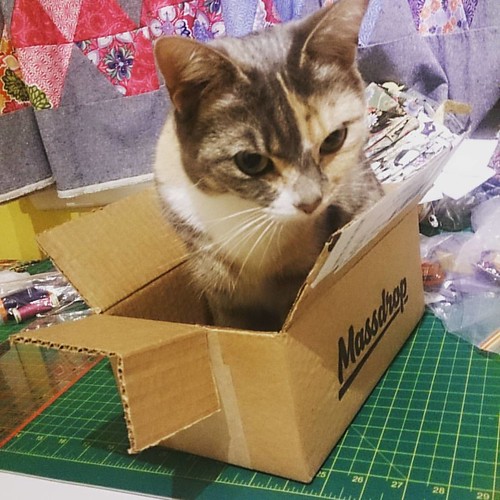 Perhaps not quite as effective as I might like, since it takes a while to persuade her to stay in the box and not walk all over my projects...

Still, Massdrop was terribly clever to make boxes just large enough for the one of my cats who likes boxes to fit in! *grins*

This Saturday I'm doing a course with Lizzy House - the Meadow quilt class in Sydney! And looking forward to it quite a bit. Except that I really need to choose my fabrics and my background and my neutrals, and I think there might be a requirement for freezer paper and ARGH SO BUSY WHEN WHAT HOW TIME UGH NOOOOO...

What's your progress this week?

WIP Wednsday: the one where I'm back!

So I have travelled long and hard in the last four weeks.

I bought a little fabric, received a bunch of happymail, and amd generally happy to be home again! 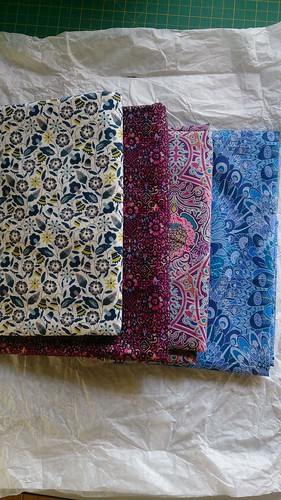 Yes, that is Liberty. I bought quite a bit to make summer shirts/things. We'll see how many of them I get through!

And, as always, there are plenty of things to be done now that we're facing the backend of the year.

Not least of which are the sewmystashmini and the hexiedownunder swaps!

So, having been overseas, I completely missed the check-in points, although I did let the Swap Mamas know when I realised they were doing roll calls and I hadn't even started! I think they were okay with it - I didn't hear back, but I'm going to assume that it was all done and good.

In the meantime, I'm going to use the leftover pieces from my Swarm quilt, so not only stash but unused pieces! This does limit me by colour palette, but I don't think my recip will mind.


First time using the sewing machine since I got back! Oh, Mako, how I've missed you! 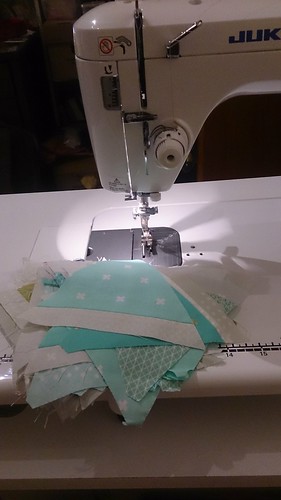 And all lined up:
Configuration 1 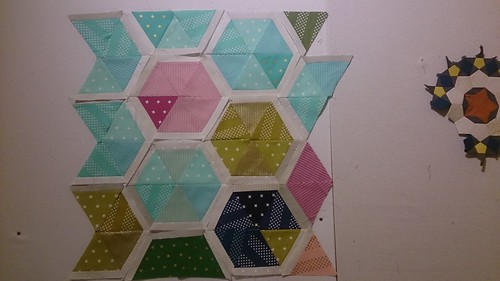 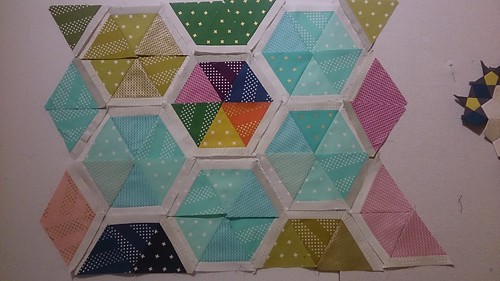 At this point, I'm going with configuration 2 and calling it "Not Like The Folks Next Door", because the name tickles me. (The number of quilts that have been named because the idea tickled me? A great many.)

I don't have pics of my hexies, mostly because I've run out of hexie papers and have to acquire more! But I got about 4 sets of flowers done while travelling - not as many as I wanted (considering there are 18 sets in total) but better than nothing. It's going to be a rather busy two weeks of hexie sewing, alas!

I didn't end up wearing either the SHIELD dress, or my 1920s evening gown. We were busy or too tired, or my roomie was intent on making her suit absolutely perfect and we didn't get out...

These are my roomies, BTW - Hawkeye and the Black Widow from Marvel's Avengers: Age of Ultron. Yes, she made both outfits, and they are true to the movie - including the glowing blue lines on the Black Widow's costume. 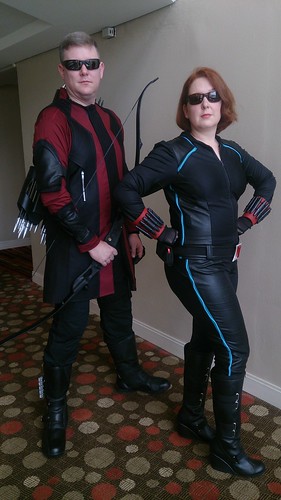 And yes, they're still cross that the movie married Clint Barton off, and tried to pair Natasha up with Bruce Banner.

If I'd had time to study the dress (and if I'd had time), I'd have dressed up as Maria Hill from Avengers: Age of Ultron - one of her outfits in the scenes where she's talking with Cap? Oh yes! And, of course, it was only once I was at the convention that I realised I could have gone for a red dress, a leather jacket, and a gold necklace like in this pic:

Anyway, this was my costume for wandering the DragonCon halls at night: 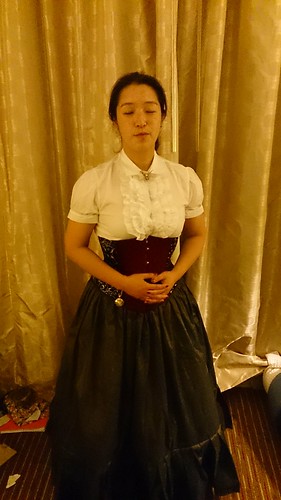 Sorry about the photo colour, I gave the camera to Hawkeye!Roomie and he didn't know to adjust the white balance.

It's going to be pretty busy going on from here - I have a bunch of goals to hit by the end of the year. Not least of which is getting some FMQ practise on various quilts that need quilting.

There's also the Lizzie House Meadow quilt class on the 29th September, which will be pretty exciting along with my Sydney Mod Squad ladies!

What have you been doing the last few weeks? I'm going to have an awful feedly backlog!
Posted by Sel at 8:45 AM 5 comments:

After a month gadding about the globe, I'm finally home again. Lovely as it is to travel, it's equally lovely to be home. (Except for the bit where I have to go into work. That's not so great.

I have fabric (some Liberty, some Vietnamese silk) and many plans!

Things that are scheduled for doing (classes, QALs, etc.)

Things on the plate for doing

7. Summer dresses and tops with my Liberty fabrics.

Amidst all this, I have to start planting out my garden for summer. It's going to be a busy few weeks, I think...
Posted by Sel at 5:59 AM No comments: