BLOGHOP TIME: See You In September!

It's SPRING! *runs around like a little chickadee in season-warming glee*

Down here in Australia, it's the 1st September, and therefore also the first day of Spring. (Equinoxes, schmeequinoxes. We count the seasons by date, none of your planetary motions and solar proximities biz, thank youp!) And the weather here in Sydney has kindly taken on a lovely spring tinge. It will doubtless rethink this as September progresses, but for the moment, it's all happy and delightful and glowy.

And particularly because I HAS A HOUSE! SO HOUSE! MUCH EXCITE! 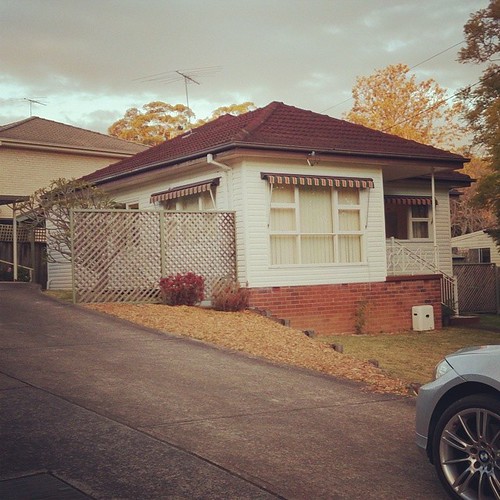 My sister and I bought a property together in suburbia. It's a lot smaller than our current residence (which we share with our youngest sister), so it's going to be a bit of a squeeze to get everything in there. And yes, I have a quilting workroom - although I'll be sharing it with my sister, half-half, so it will get rather squeezy in there at times.

Still, it's OUR HOUSE!

With a yard! A flat yard! That I can grow things in! (Since it's spring.) FRUIT TREES.

But you're not reading this blog for that. *coughs*

Madam Samm of SEW We Quilt runs regular bloghops, full of quilters, their links, and their creative outputs, and this one was run over the Northern Hemisphere summer with a fairly simple fiat: create three things, one of them with Riley Blake Designs Gingham. Be as creative as you want!

So, this winter (Southern Hemisphere) I made...uh...quilts. More quilts!

I know, it's not very creative in the 'expanding out of my comfort zone' way, but I haven't really had time to experiment very much in the last few months. I hope I will in the coming months, though!

I've had the fabric for these for a long time, but never actually got around to putting it all together. 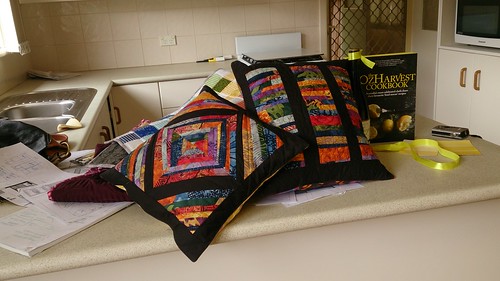 The first two cushions are made from off-cuts from the batik quilt which has been sitting on my bed for several years now. Their framing is (unfortunately) some polycotton that I thought would be good enough for making things out of. Note to self: polycotton cannot take the heat (of the iron) and should stay out of the sewing room!

They're small cushions - only 14"-15" - and will probably just lay around on my bed, being co-opted by the cats.

The second two are from a pattern that I worked out a couple of years ago, and which I never managed to incorporate into a full-sized quilt - the Snowflake Block. 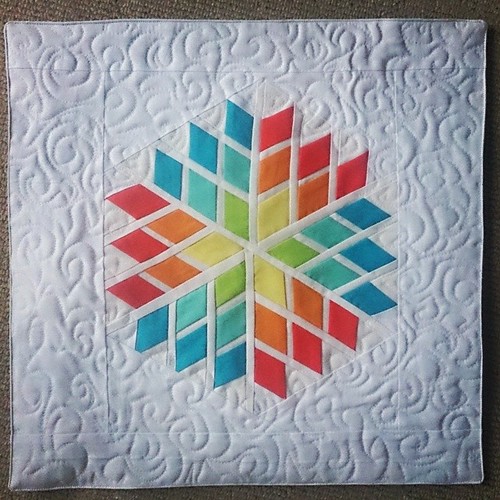 Looks even more spectacular with some colourful backdrop: 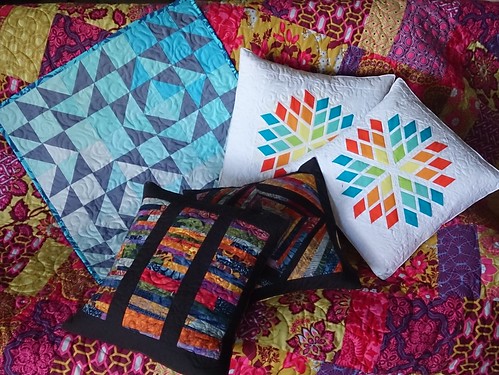 My sister's comment when she saw them was: "Are they for us?" Namely, were we going to get to keep them (rather than them being farmed out as gifts). Yes, they're for us. :)

The Sea Breeze Mini Quilt pattern was developed by Megan of Canoe Ridge Creations, and when fellow Australian GnomeAngel asked for volunteers to participate in a bloghop, I figured 'oh, why not' in spite of the fact that work is crazy, house is crazy, and winter is always an exhausting time for me.

Yes, I have a problem with overcommitting.

Many wonderful artists joined in with the bloghop and quilt-along, and if you haven't seen them, I recommend a quick hop over to GnomeAngel's blog and the Sea Breeze MIni QAL to see how it all went! 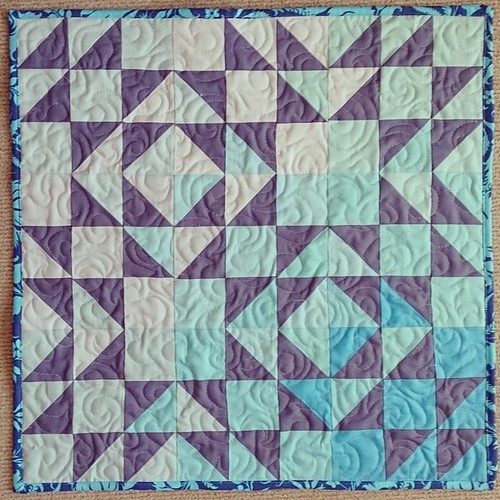 I'm pretty happy with my resultant mini...even if I have no idea what I'm going to do with it now...

I know, dreadfully unoriginal name for it! 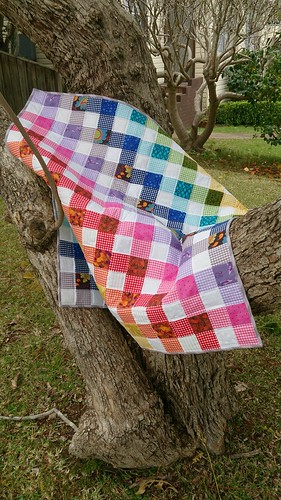 I admit, I didn't read the requirements for this bloghop very well. I completely missed the whole bit about one project having to include RBD Gingham. And than I was horrified: GINGHAM?!?!?

After a few moments and a bit of searching on the intarwebs, I found a little roll of RBD gingham in rainbow colours. And a little imp suggested: "Why not make a gingham quilt out of gingham?" 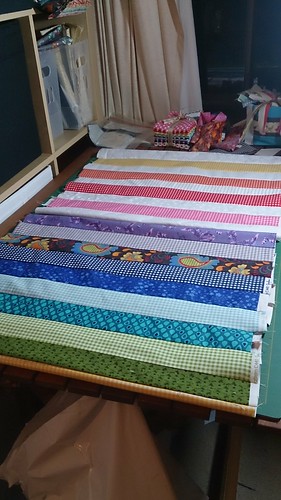 Part of the due inspiration for this goes to La Madame Samm herself, who painted her room gingham and showed us the process. The idea that gingham could be more than just a fabric weave was something I'd never considered before. (I'm afraid I don't usually spend my days contemplating gingham in all it's monochrome glory.) 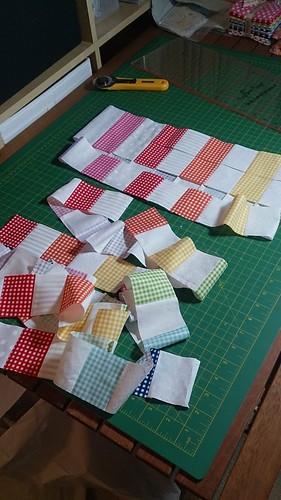 I worked out that the gingham pattern was nothing more than an endlessly repeating four-patch with one solid square, one white square, and two half-half squares, where the two half-half squares are always set diagonally from each other in the four-patch. The colours themselves are less important than the value difference between the fabrics. 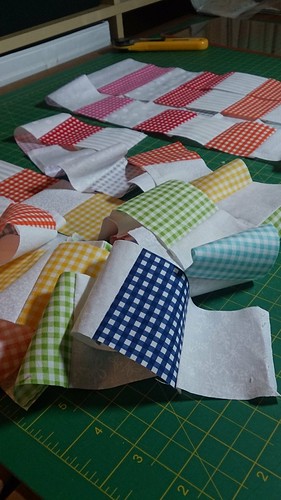 So rainbow gingham, rainbow prints (rather than solids), and white prints gets you a gingham quilt! 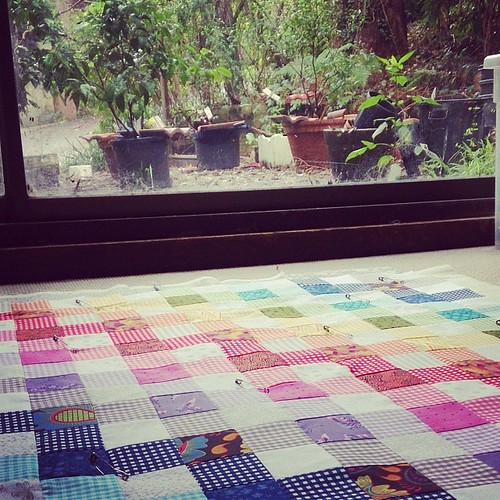 I rather like it in the pretty rainbow colours. And in the setting of my new house! 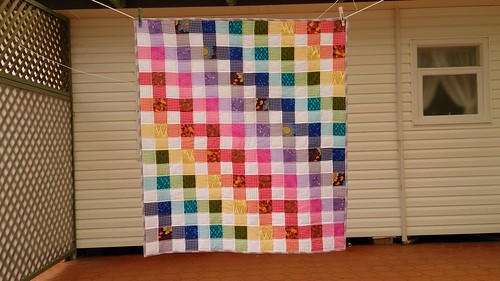 So that's my post for the See You In September Bloghop! I hope you go check out some of the other posts from today and all the rest of the blog hop!

Sew Incredibly Crazy
Bumbleberry Cottage
Thimblemouse and Spouse
In The Boon Docks
Go wander, check out, leave comments, and generally admire the lovely projects (gingham and other) that us fabulous quilting ladies have done!