I've found that one of the best ways to achieve my Q2 goals is to turn them into an external deadline. Like entries for quilting shows... 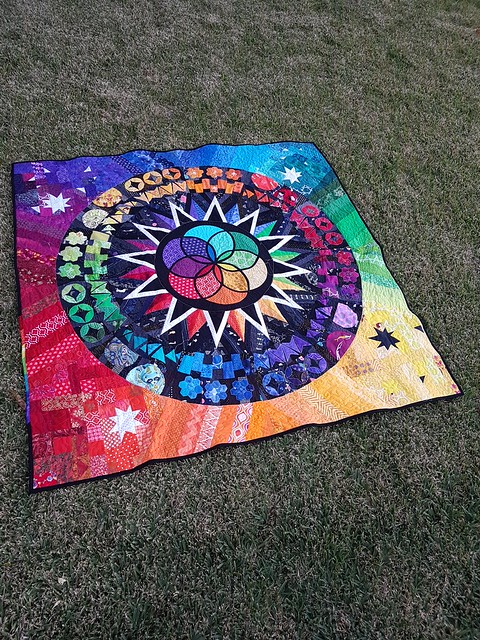 I submitted my Technicolor Galaxy (the 2015 Skill Builder Block Of The Month Quilt by Alyssa at Pile O'Fabric) to the Sydney Quilt Show, which put it on a timeline, and meant I had to get a move on my quilting. At the time, I'd only just started working on it, although it had been out since 2015.

Choosing a dark design with heavy, saturated colours was a bit of a risk - all the other versions I'd seen made were pale backgrounds. 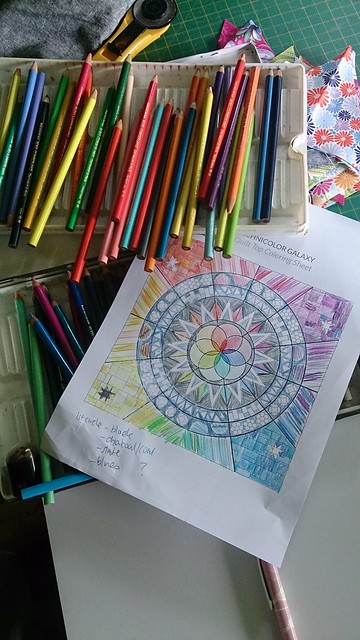 But once I got moving with it, I really rather liked the bright colours against the black. It gives it…punch. Pop. Zing. That little something more. 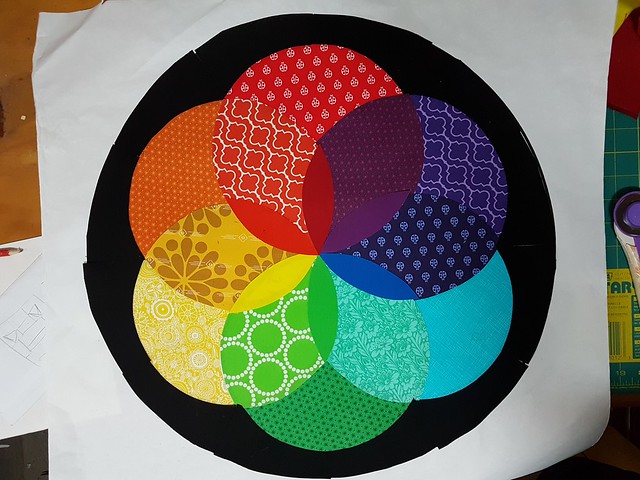 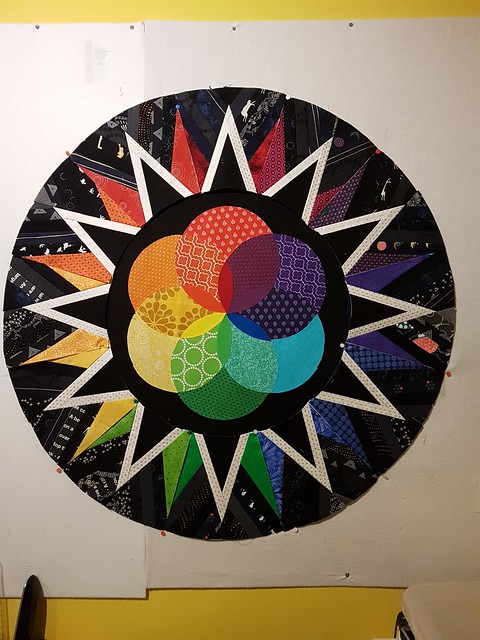 Also, making the background ‘patchy’, and trying to gradate the colours around the arcs of the circle? Was a pain in the butt! So many fabric shades, so many delicate shifts of colour – and the blues and purples are particularly awful for this! 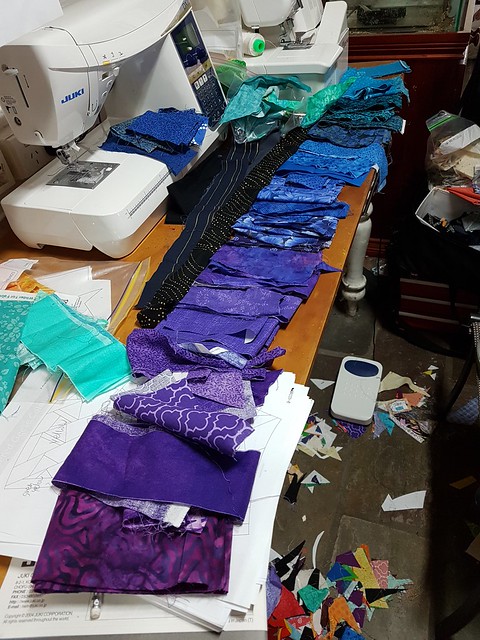 Meanwhile the yellows are not very varied at all! 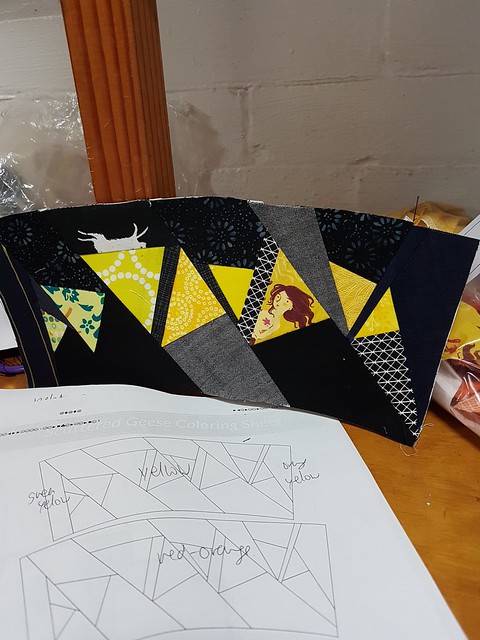 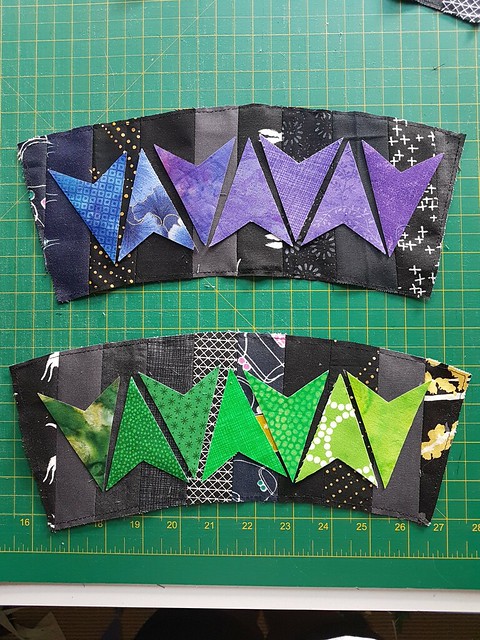 The thing is, once you start putting it all together as a whole, you don't really notice the fine details. However, I note that never stopped any quilter from angsting over fabric choices! 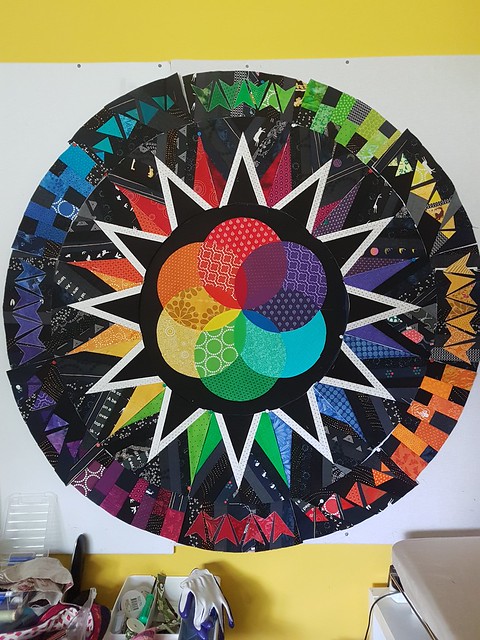 Also, I didn't quite follow the order of blocks for the pattern. I'm not really good at English Paper Piecing, or turn-under applique, so I tended to leave those until last. 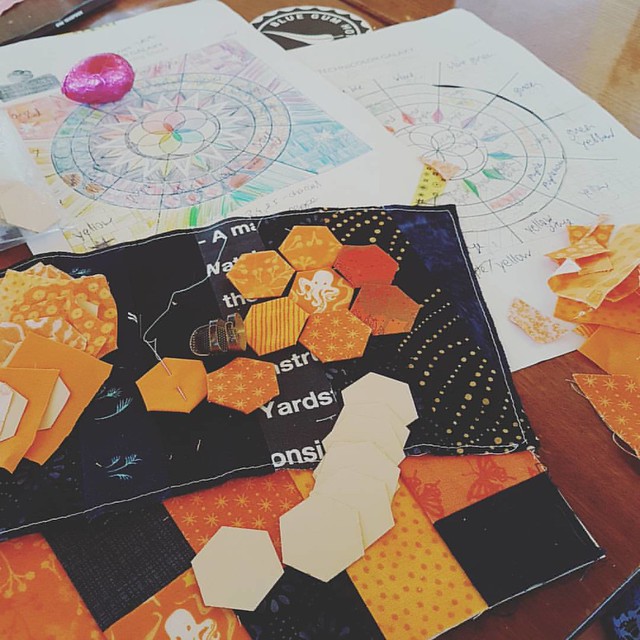 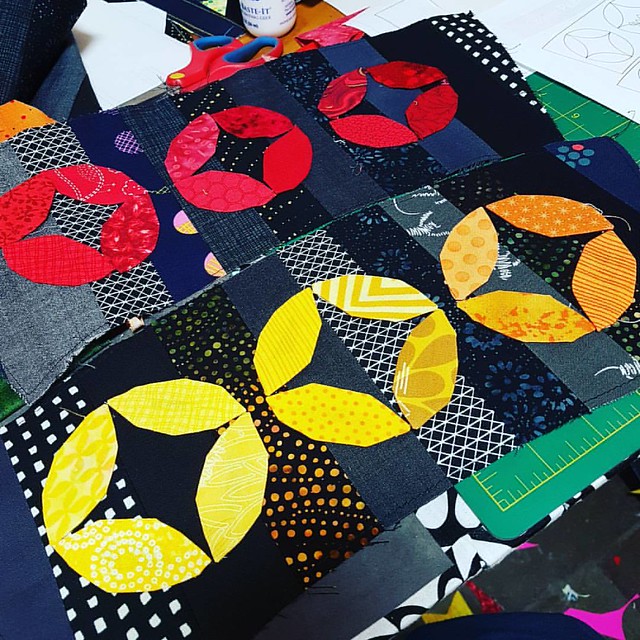 And then it got accepted for the Sydney Quilt Show, and the pressure was on! 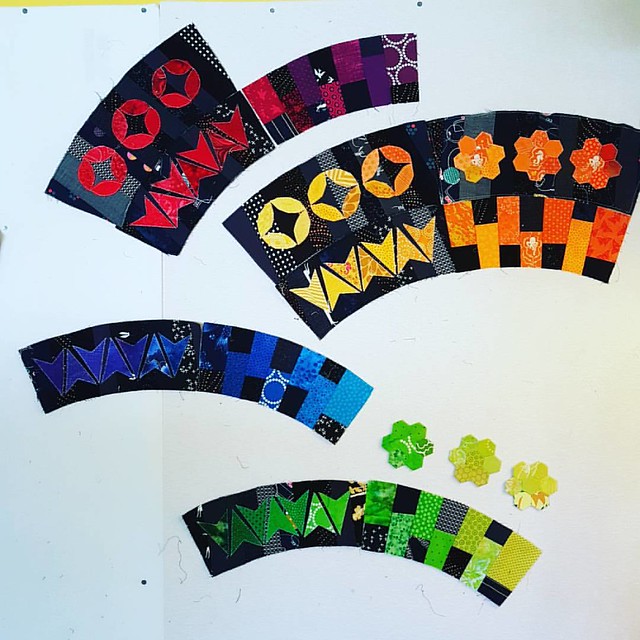 So, I thought it looked pretty good when I had all the 'arc' sections done, but once I started putting the background together, I was blown away. 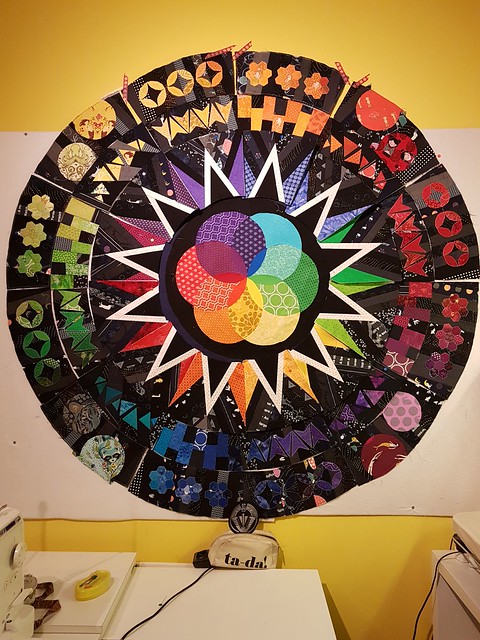 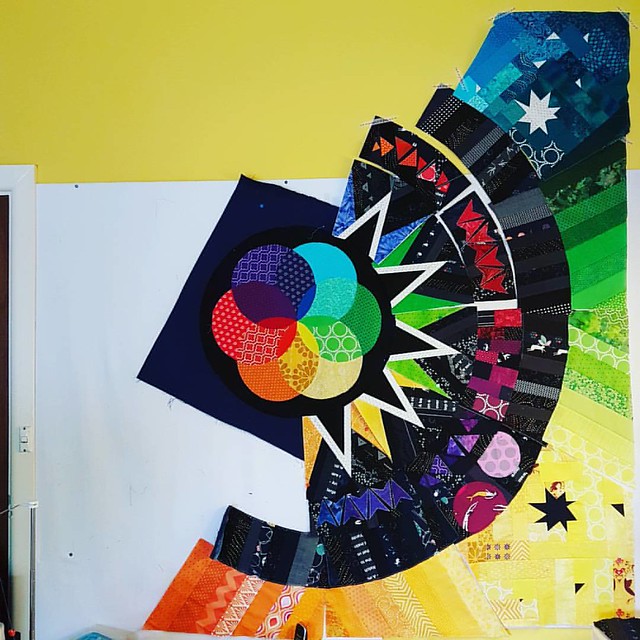 I think it helps that I didn’t have the radial lines of the section binding interrupting the flow of the colour, too. In the QAYG version, the quilt is usually put together in a dozen ‘spokes’ and each spoke is joined to the others by a strip of binding. Which would be great if the background is one colour and the spokes match that colour (or are a deliberate contrast), but isn’t so hot when the colour changes around the circumference of the quilt. 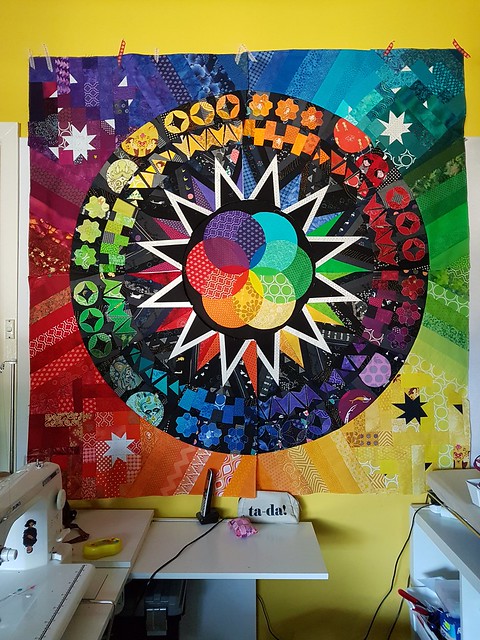 Unfortunately, in the process of quilting it, I stuffed up. The back ended up all wrinkly and wobbly and sewn-in. If I was really dedicated to making this a quilt-show worthy quilt, then I could have redone it. I decided not to bother. But I’m going to have to work on my quilting techniques. They’ve been really bad lately. And no, I don’t expect to win any prizes, but it would be nice to have a decent back.

Ah well, it still looks pretty good from the front, even in the not-so-great lighting of the Sydney International Convention Centre where the Sydney Quilt Show 2017 was held! 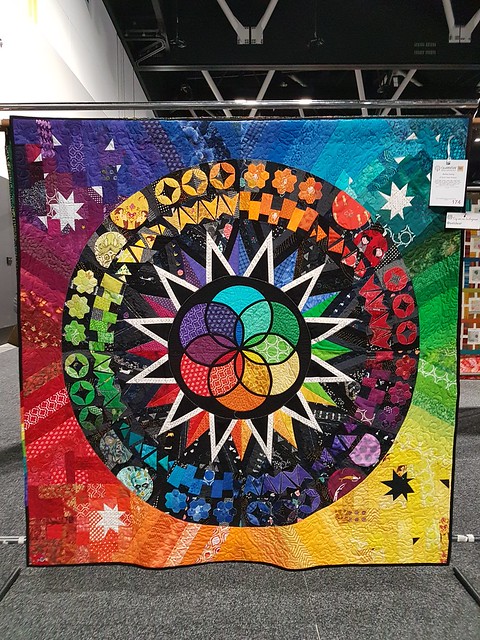 I called it the Duct Tape Galaxy, because, like duct tape, it has a light side (the back), a dark side (the front), and it holds the universe together!
Posted by Sel at 8:16 PM 3 comments:

If you don't know what you're shooting for, you can't possibly know where to aim, can you?

These are the goals I'm aiming at for the 3rd Quarter of the 2017 Finish-Along!

Goal: Completed.
For the daughter of a friend. A variant of Aneela Hoey's Magic Stars, in rainbow on black background.

2. Break Free Or Build Upon 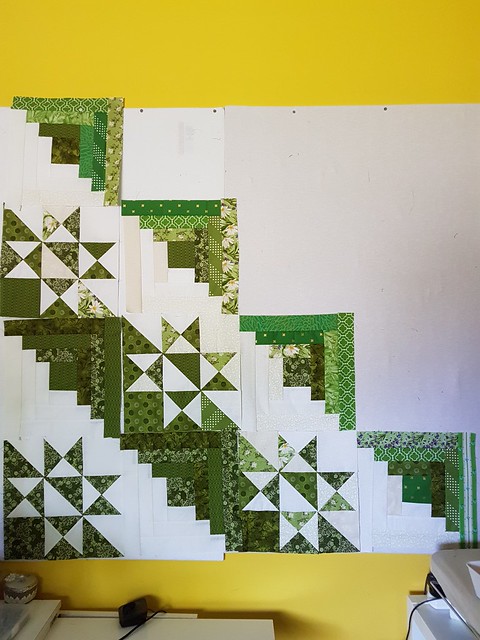 Goal: Completed.
I think I'll submit this one to the Sydney Modern Quilt Guild show.

Goal: Bagged and ready to sew.
Would like to get this done. Chances of getting it done? HAHAHAHAHA.

4. Backings for 4 quilts and sent off to quilter

Goal: Sent off
- French Farmhouse
- Valley of the Kings
- The Seaweed Is Always Greener (Mendocino 1)

Goal: Bagged and ready to sew.
The Sydney Mod Squad (my local quilting group) are probably going to be doing an Aviatrix Medallion sew-along in the coming months. I've had the pattern for a while but haven't done anything. At this point, I'm leaning towards the Summer Palette that Hartman has put up. Maybe with Kona Slate or Steel as the background...

Goal: Completed. (Or else, segmented into matching cushion covers for the lounge room.)

I'm concatenating this one. I was very tempted to lay it out, cut it into squares and make quilted cushions out of it, but a friend has persuaded me otherwise. At least for the moment. How long this persuasion lasts...I can't say. We need some new quilt cushions...

Yes, that's a lot of goals, but one might as well aim high and aim hard!

This is the Summer Meadow quilt completed! I finished the top back in Q1 of 2017, and in my Q2 goals link indicated that I wanted it completed during this quarter - and I succeeded!

I'm pretty happy with how it turned out, although I wish the quilting was better. 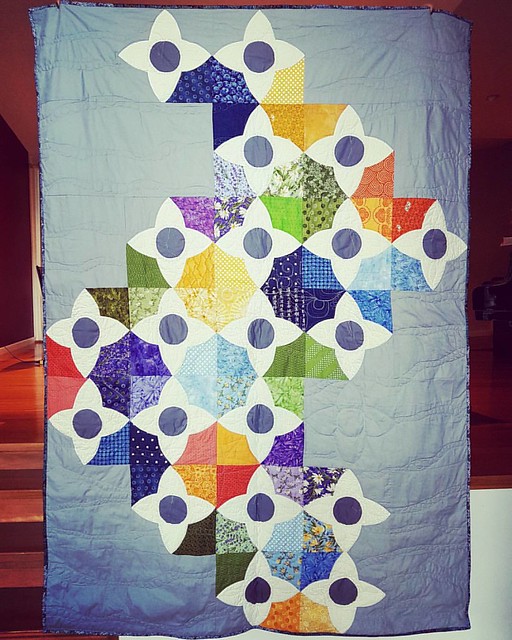 It started with a class with Lizzy House, whose designs a few of my quilting friends ADORE. I didn't mind the fabrics, but I rather liked the quilt, and since she was only teaching it in person, I attended the day.

We got the pattern pieces, the instructions on how to put it together, and the suggestion that once we did the 'eyes' (the grey centre and the two petals either side of it), then completing the rest of the quilt was practically a foregone conclusion.

Of course, there were some small problems with the blocks, which were very frequently not!square. 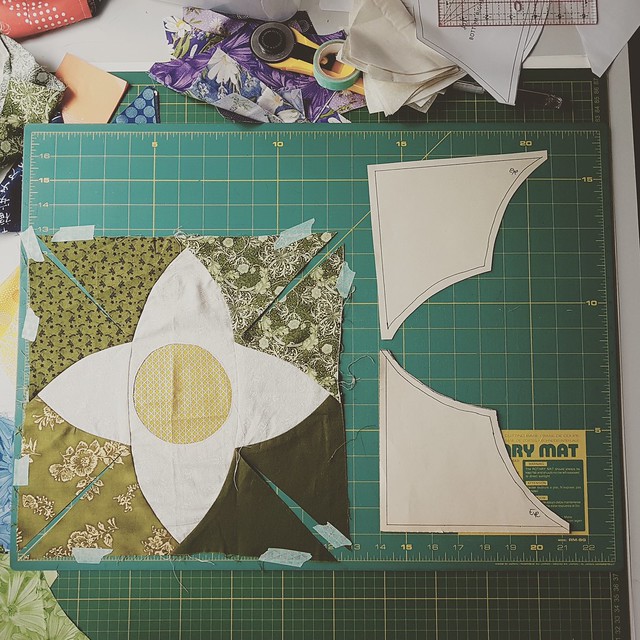 I ended up redrafting the pattern as per Quilts Of A Feather's Instructions For A Meadow Quilt Fix, but by then I'd already made most of the blocks.

Ah well, next time! They were flat enough to join together at any rate... 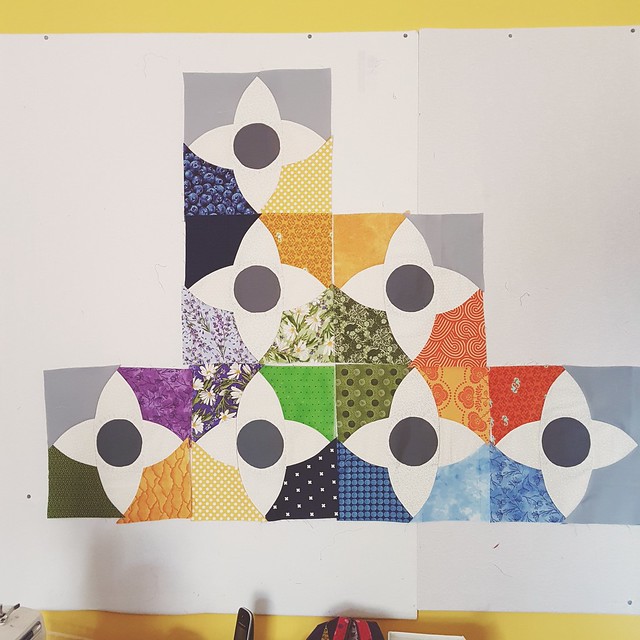 There was some fun with switching pieces around so they were the right way up... 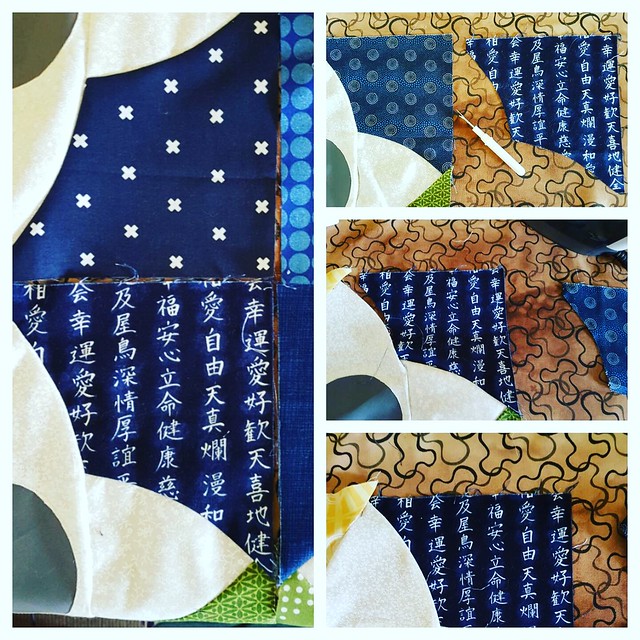 And the original configuration was a 4x5 rectangular 'field' of flowers, but I decided to shake it up. 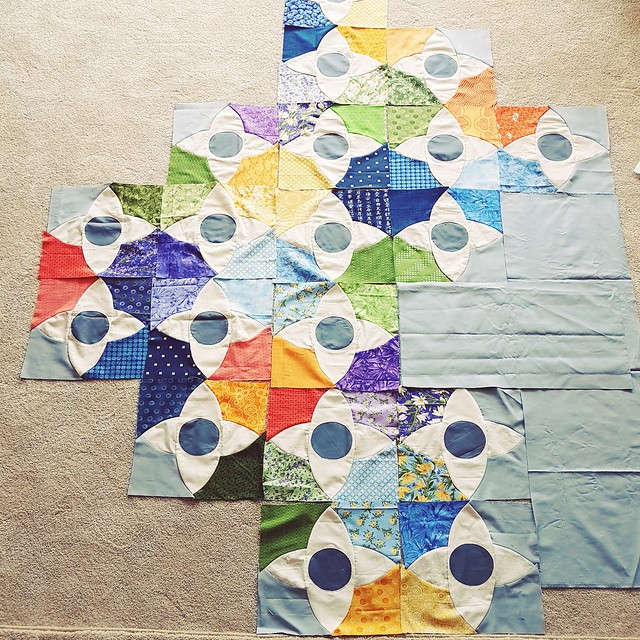 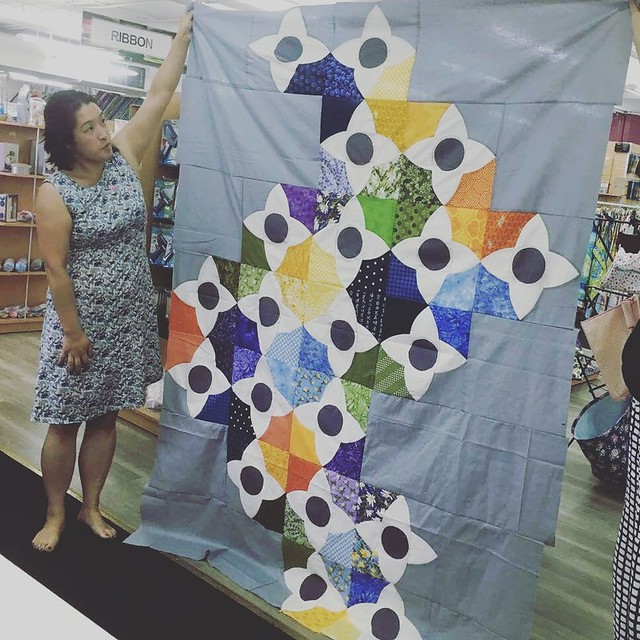 My impetus for completion ended up being the wedding of my cousin-in-law when he remarried this May. I never got to give him and my cousin a quilt before she died, but I did manage to give him and his new wife (a lovely woman) one. And my cousin is represented in the flower that isn't pieced, only quilted. 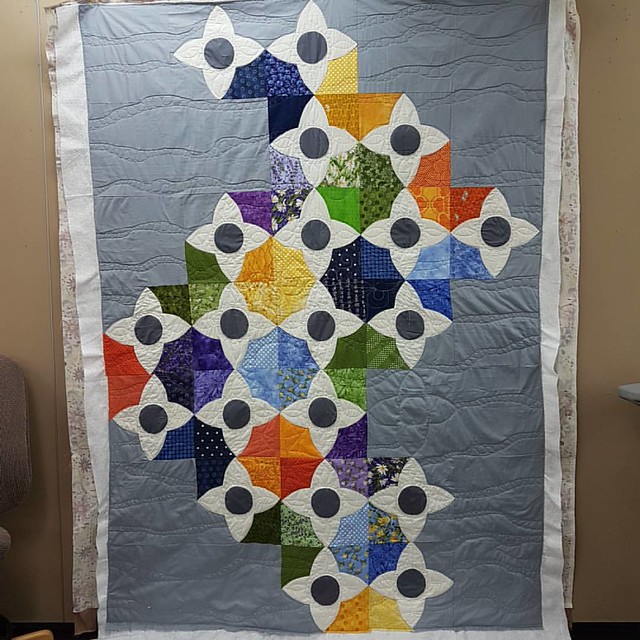 It's still not the flattest quilt ever, but it's not too terrible!

I just handed in the Duct Tape Galaxy for the Sydney Quilt Show. It's kind of spectacular when you get to see it from a distance.

Unfortunately, I had to cancel "Break Free, Or Build Upon?" because I bashed a finger at hockey a week ago, and got a full-time job a month ago, and I simply didn't have the time to piece and quilt it. If I can get the last 10 blocks done in the next few months, then I'll enter it in the Australian Modern Quilt show in November and see if they take it.

The next quilt on the list is going to be Eilidh's quilt - the daughter of a Canadian friend of mine, who's asked for a quilt for her daughter at the end of the summer. I have a plan (Aneela Hoey's Magic Stars) and a few ideas on how to incorporate the rainbow of colour that her mother wants. I need to work out the mechanics of the quilt before I can actually start pulling/cutting fabric. That has a deadline of August for completion, and it's going to be a lot slower since I got the job.

In the meantime, my brain is on medallion quilts. The gals in my quilting group are thinking of us all doing Elizabeth Hartman's Aviatrix Medallion together. And I bought the pattern for Girt By Sea (designed by a group of Australian quilters), but was too busy on my show quilts to get involved with the quilt-along for it. But I have plans for that too.

I really like the summer palette for the Aviatrix Medallion. Although my instincts are to go for black and grey backgrounds and saturated colours to pop...

Do you get the feeling I like rainbows on black?

I'm thinking about doing the star in yellow, with black above and red below, before surrounding it with the orange of dust. Then golden plains of wheat with white windmills, green rainforests with bright floral bursts, blue mountains, and indigo sea, with the multicultural braid in a rainbow of colours against a black background.