I am tempted to do the 100days100blocks2017 challenge - but not with the Tula Pink book (which I don't have and don't really want to buy).

Instead, I would make 8" blocks from Quilter's Cache - free blocks patterns, stick with the paper piecing ones. I'd make it a rainbow, and use the scraps I already have in my collection.

Of course, in doing so, I wouldn't be eligible for the prizes of the 100 Days 100 Blocks challenge, and they are lovely prizes. I just don't want to pay the money for the book - I already have two books of blocks that I don't use - The (in)famous Farmer's Wife Sampler Quilt, and Carol Doak's 50 Fabulous Paper Pieced Stars. The Farmer's Wife book (the old one) requires printing out individual template shapes from a PDF, and The Paper Pieced Stars requires photocopying. I could scan the Paper Pieced Patterns, but the Farmer's Wife book is a real tickler, unfortunately...

So, choices. Decisions. Plans. To do or not to do?

Also: this may not be a good time to do 100 days of anything. My Quilt Show quilts are due (they've actually asked me to retract one, apparently they have so many, they're having trouble choosing), and I also have a commissioned quilt to make, as well as roman blinds for my father. So. Busy.

But I am really tempted.

You know when a really valuable fabric comes into your hands and you're stuck wondering what to do with it? 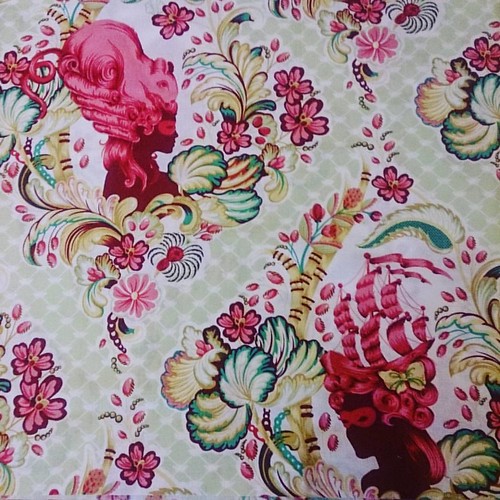 Well, that was my problem with the length of Tula Pink's Parisville Cameo that I bought in the last year. Yes, it was ridiculously expensive. Yes, I bought it anyway, because I liked the pattern. The colour wasn't quite right, though. A little too clashy for me to match with anything I had. So when one of those instagram quilty pay-it-forward kind of things turned up in late 2016, I asked if anyone was willing to swap me another colourway of the Parisville Cameo.

Enter myfabricobsession on Instagram, who was willing to swap her Cameo in Mist for mine in Pomegranate. ALL GOOD. And she was even willing to send me a little more than I had! (THANK YOU!)

And then I stashed it. (Because that's what you do with a fabric that you really like but which you're not entirely sure you have a plan to use just yet.)

I finally decided what to do with it - make a Fireside Bowl Bag (from the book 'Big City Bags' by Sara Lawson of Sew Sweetness) with the contrast of some beautiful royal blue leather. And as it turned out, she's running a bag making competition during April! What luck!

It took a while to complete - about two weeks on and off - but it's finally done! 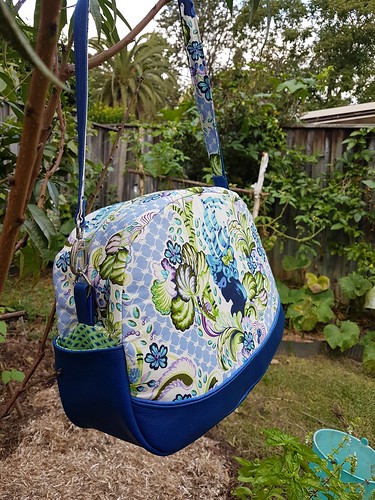 There were complications - mostly in the form of cutting angst (measuring twice, cutting once), the grim terror of sewing expensive leather that you really don't want to mess up, adding external and internal pockets (because I don't need a billion pockets, but I do like a few inside and out), and the terror of pattern adjustments required when you cut a piece of 'gusset' a little too short and have to 'make up' the length...or else cut down the outer pattern. 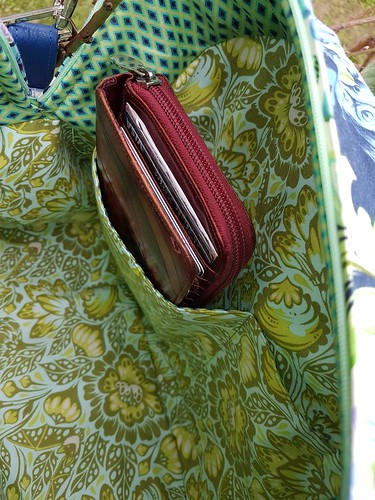 I also added feet, so it wouldn't have to sit on the ground. Sadly, cafes in Sydney are not yet quite so sensible as to have a hook under the table for women to hang their handbags off so they don't have to sit on the floor, or else hang off the back of the chair and be in the way of the waiters. 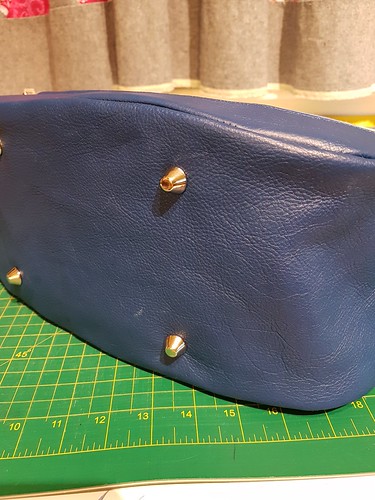 I like at least one external pocket, suitable for stashing a phone, or a transport pass, so I don't have to fish around inside my bag for it. Unfortunately, the Fireside Bowl Bag pattern doesn't have any pockets, internal or external. So I just designed a external pocket and a couple of internal ones to suit my needs.

The external pocket doesn't work quite as perfectly as I hoped - the strap pulls the pocket open rather more than I like. But it's a pocket and I figure more people won't notice. 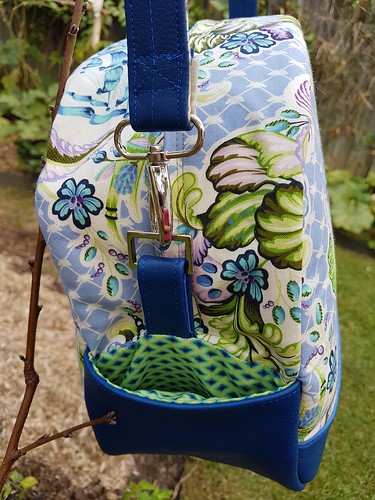 For the lining of the bag I used Bats In The Belfry and Tudor Windows from the Elizabeth collection since I started with just Bats and then realised I didn't have enough for all the lining and the pockets.

I made one zipper pocket and one internal slip pocket, utilising the pocket-making skills I learned while making the Shiloh Mermaids Bag. The 'slip pocket' is supposed to be large enough for my purse and my phone to sit there, but it will probably end up being my purse and my glasses case. 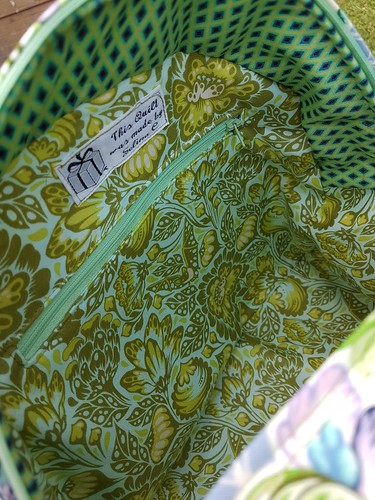 Yes, I know it says "This Quilt Was Made By Sel C" but I have dozens of these labels and a need to use them!

The strap gave me a great deal of trouble, because the bag instructions were for a cloth strap, not leather. And I discovered that doubling, then quadrupling the leather that you're sewing through is a sure-fire way to give even your industrial strength Juki TL-99P a headache! So instead I made the strap half-leather and half-fabric. And I figured I should use the selvage while I'm at it... I tend to throw the selvages out half the time - or sell them. 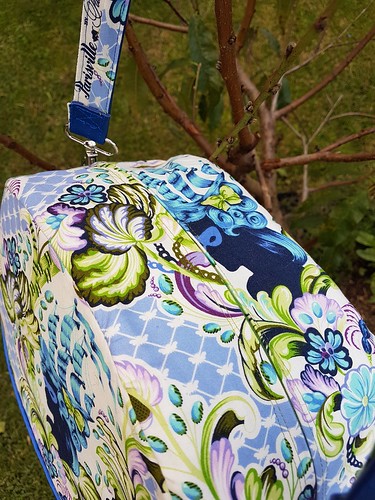 All in all, I'm actually pretty happy with the form on this bag - usually I find myself a little dissatisfied with the way everything fits together, but this one has a good shape and a good form. For the record, I used a very stiff, felt-like bag-making material which is pretty spectacular at holding its shape - but I don't know the name of it! I don't even remember where I bought it!

The last Fireside Bowl Bag I made was with Cotton+Steel and it was a lot more squishy than this one - and I like a solid, firm, keeping-it-shape bag. 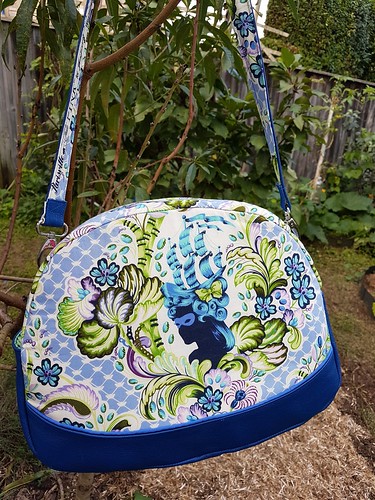 As bags go, this one is sharp, stylish, and definitely a keeper!