I have never worked with knits before, so it's always a little daunting. Zig-zag stitches? Overlocking edges? Slippery fabrics? Can't I just do it with wovens?

Well, mostly I can. Mostly. However, I have bought a lot of dress fabric in the last three years as well as quite a few patterns, and have not made halfway enough clothing from what I've bought. I mean, I tend to buy evening/dress patterns that aren't really good to wear to work, but they're just so pretty, and I do look good in an evening dress.

However, my local dressmaking/sewing group has now scheduled monthly socials on weekends, which makes it an excellent opportunity for not only being social, but also the opportunity to set myself a personal challenge/deadline to start SEWING CLOTHES instead of just CURATING FABRIC!

I started with a pattern called the Eva Knit dress. It won a design prize in 2013 or 2014 and was all over the internet for a while, but there are precious few pictures of it on instagram - apparently it doesn't suit all body shapes/styles (well, what does?), and at some point in the last few years, the pattern print-out became separate to the instructions, and the instructions became pay-only.

I had the pattern, but couldn't find the instructions. So I coughed up the money hoping that the design would be good enough for me to make decently. 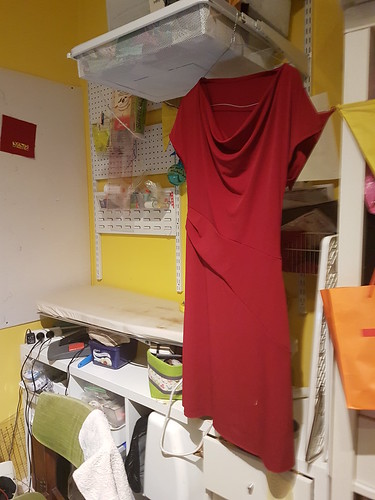 It's a cowl neck dress with a front yoke draping design , bodice-sleeves (not separate pieces), and a dart in the back. 7 pieces, classed by the designer as 'easy'.

There were some definite issues along the way. I either cut the bodice the wrong way, or the front yoke and the skirt. I think it was the bodice, but by the time I realised it, the top was already sewn together. 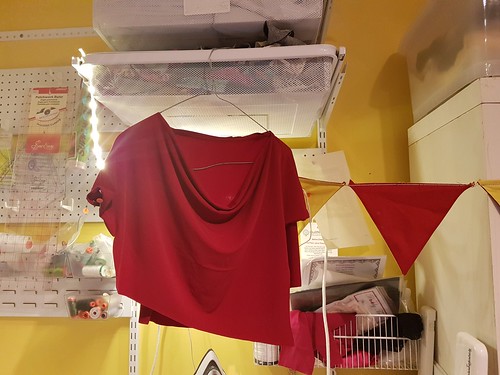 That angle is supposed to sweep down to the opposite side of the body. (The back top is square and joins to the back skirt square.) And it wasn't until I was fitting pieces together that I realised I'd cut the front yoke and front skirt the wrong way! Luckily I had excess fabric - it was about 3m of a fabric I've had for ten years, out of which I made a Number Six Cylon dress to wear to DragonCon 2009.

I got everything together, sewed it up and wasn't impressed. I hadn't put the back 'pinch' in yet - at least one sewing blogger who'd made the dress before didn't seem too impressed by the pinch (two folds of fabric sewn into the centre, but on the outside, so you could still see them), so I was wondering if I should do the fold or some more standard dress darts. 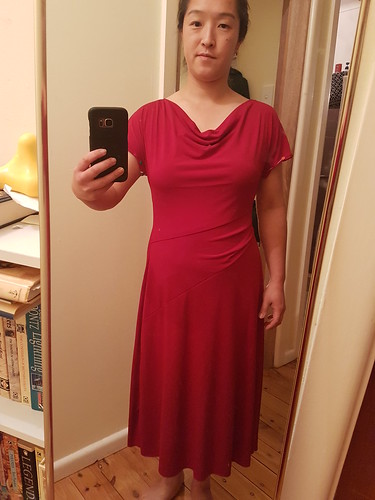 And then I put the darts in.

Somehow, putting the darts in made the dress for me. It just...looked right. It looked good. I had a waist!

And there was much rejoicing!

This is the finished result, worn out in town on a wintry Friday night (layered with a shrug, a scarf, and a nice thick coat), and I really like it. 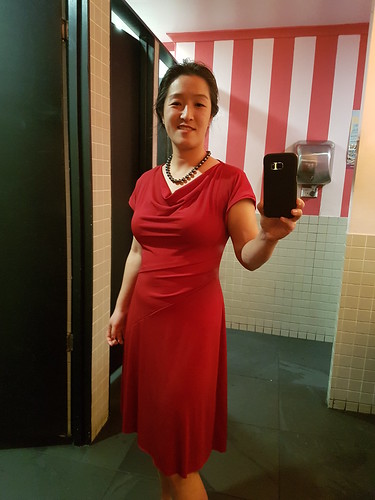 Definitely will make this pattern again, perhaps in a heavier fabric for autumn/spring wear. It would also work really well with something that had a slight shimmer or light-variance to it when it folds - the draping would look quite spectacular!

Eva Knit Dress
complexity: low - the instructions are pretty straightforward.
sewing skill level: moderate - you need to know how to sew knit fabrics and not just wovens
result: excellent - I like it! 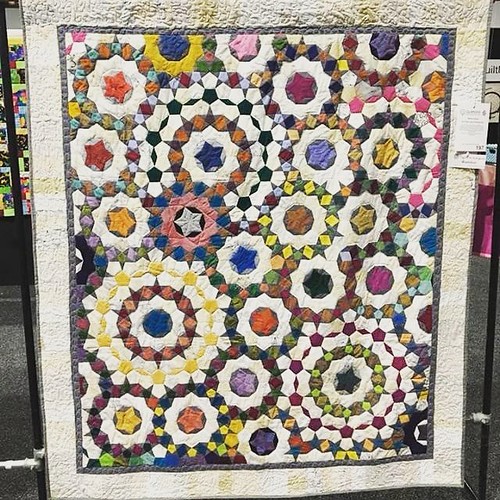 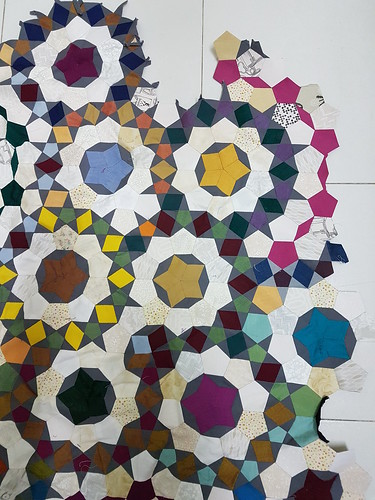 And retreats...at which there was more sewing... 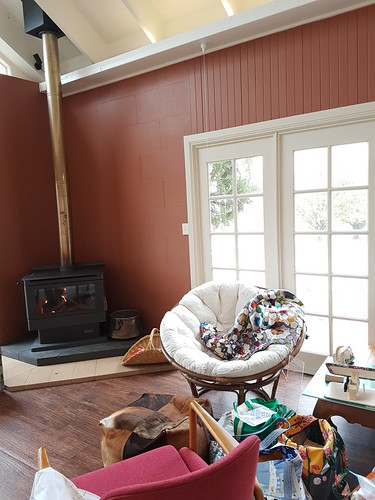 But I gotta say, the top looked quite stunning when finished: 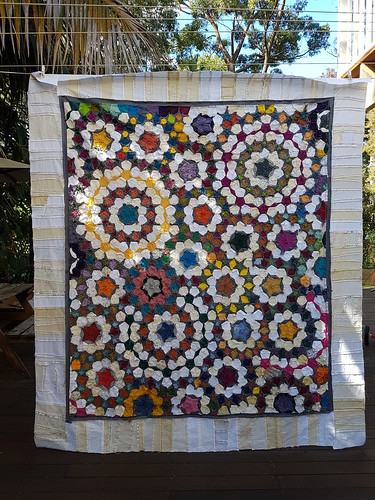 And the cats were really fond of it! 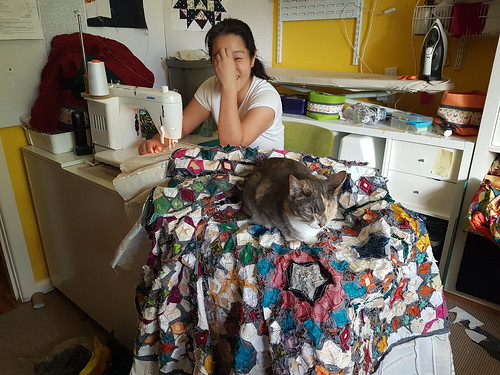 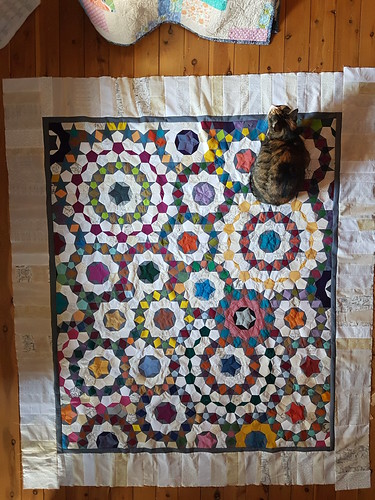 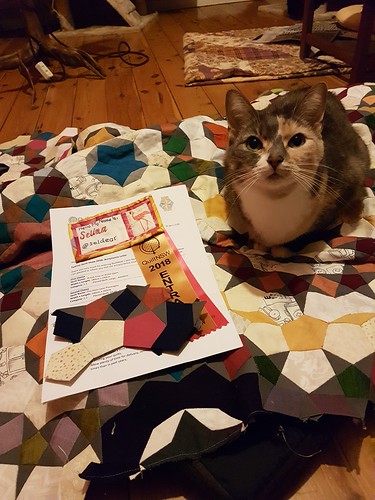 Certainly the quilting on it is terribly amateur - my plans to use a friend's quilting frame with my domestic machine were stymied by the limitations of the throatspace on my domestic: 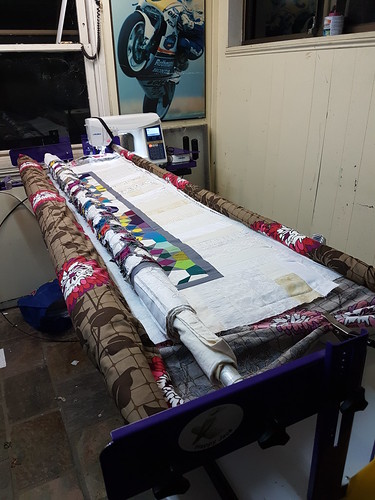 So I just did the edges on the frame, and resolved to do the rest of the quilting in FMQ, off-frame, on my domestic. 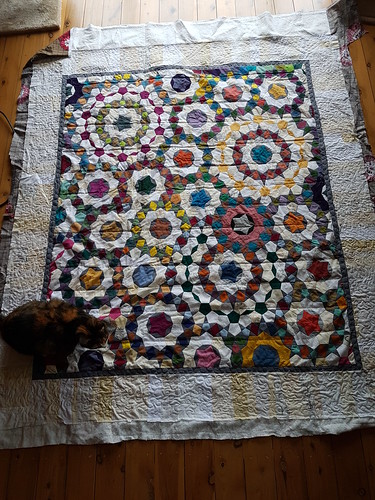 That didn't go as well as I might have liked. First time FMQ a full quilt on my domestic, even with rulers? Yeah, nope. 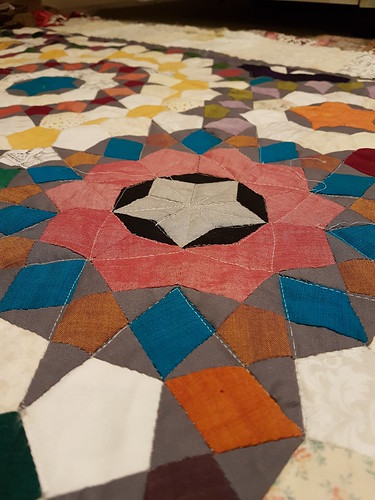 The next handsewing project is another quilt from Hammerstein's Millefiori Quilts book: Made By Restless Hands. I hope to get a start on that in Q3 2018. But more on that later... 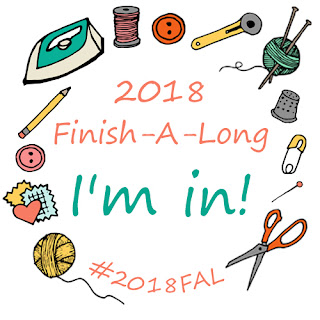 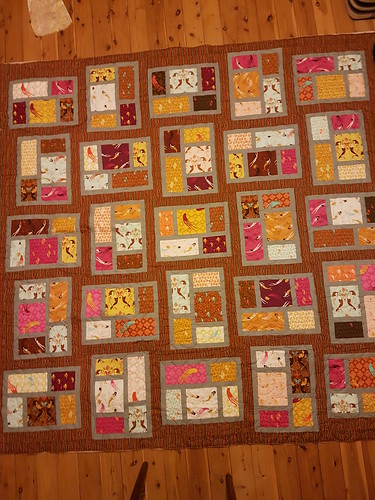 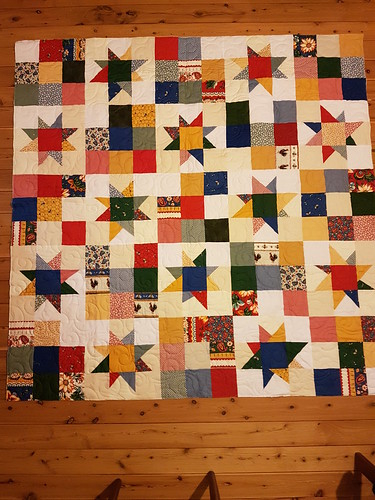 3. Two flimsies
- scrappy Round The World 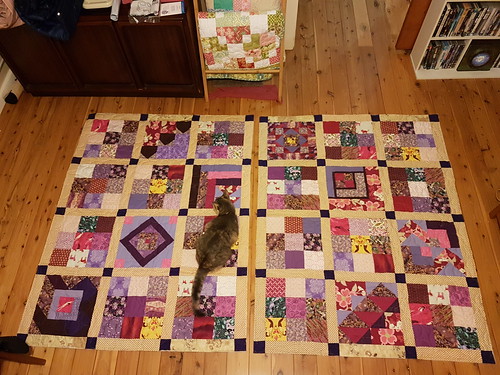 4. Two wearable items
- no description on what just yet, because I haven't decided - HALF DONE!
Posted by Sel at 11:08 PM No comments: