It is finished! (Well, the top, anyway.) It's the scrappiest quilt-top I've ever made - usually, I select specific fabrics and the pattern is very organised. But the decision to use a range of light-coloured fabrics rather than a single fabric or several identically-shaded fabrics makes it look very scrappy - like it was made from lots of little odds and ends.

If you look at some of the other quilts in the quilt-along, you'll see what I mean.

I didn't have time to put together all the in-progress posts while I was making it, so here's some catch-up along the way! The cut strips laid out in blocks, but not yet sewn together. The cut strips laid out in the overall quilt pattern, but not yet sewn together. It's also the first quilt top I've finished that doesn't automatically have a recipient. So I could save it for a rainy day, or gift it out to someone. I was going to auction it off for the Queensland floods, but I've donated to the flood appeals for Queensland, Victoria, and put an equal dollar amount in to Medecines Sans Frontieres for international medical aid. So maybe I'll save this one for a rainy day?

Although I do have a friend I promised a birthday quilt to back a couple of years ago and never got one done for her...
Posted by Sel at 11:06 AM 1 comment:

Under The Australian Sun by Leesa Chandler for Robert Kaufman fabrics.

I have to say, I have a yen for Robert Kaufman fabrics. They're a very weak spot of mine, and this set is no different!

Plus: Australiana! Perfect for a quilt to send overseas and remind you of our sunburned country!

Right now, I'm trying to work out what to use this in. And when I'll have the chance.

I've also ordered the Patty Young 'Sanctuary' fabric collection. Too much fabric, not enough quilts!
Posted by Sel at 9:13 AM No comments:

So...I just bought some fabric for a quilt for Agam Darshi, appropriately named "Sanctuary Fat Quarter set in Chocolate Berry, with three yards of Sherbet Aromatherapy for the backing.

I have a pattern and everything worked out for this quilt: we'll see how it goes. Perhaps it could be our February or March project?
Posted by Sel at 3:50 PM No comments:

Because my life, other than the typical work stress, is very boring.

So, it's been a busy week what with one thing and another.

In other quilting news:

The strip-sets for the postage stamp quilt-along (at ps. i quilt) have been sewn together, after much cursing and assorted grumping and several instances of running out of bobbin thread[1].

Finally, I have my friend Suds' wedding quilt in my hands at last! All quilted and so very pretty! Although now I have to do the edging. Handsewing again...

Ah well, project for the end of Janury, perhaps?
Posted by Sel at 7:08 PM No comments:

So: I've joined in with the ps. I quilt January quilt-along, for which we're making a postage stamp quilt.

The reason it's called a postage stamp quilt is because it's made up of tiny little 2"x2" squares. LOTS OF THEM.

Traditionally, one makes a postage stamp quilt out of scraps. And probably sews all the squares together individually. Did I mention that there are LOTS OF THEM?

Luckily, the quilt-along isn't going to be sewing individual squares together - we're going to strip-piece it!

First step: picking the fabrics for the quilt. I'm using a few batik jelly rolls that I've got lying around. One set of 'darks' and one set of 'lights'. I would have preferred to use a solid white print for the pale strips - the blogger at ps. i quilt is using white solids - but I don't have any to hand and I don't have the time to order any in. So this set is going to be light-and-dark batiks and I can hopefully swing it so it provides sufficient contrast in the main body of the quilt.

I only had about 60 strips in the previous pic, so I had to raid my yardage stashes for more - and, moreover, for more vivid prints. I'm just not a fan of browns, browns, browns, purples, and, ooh, look, more browns... I had some trouble with the relative values of the quilt - what the eye sees as dark vs. what it sees as light. Some of the fabrics that were in the 'dark' roll were actually 'light' values and so didn't contrast enough.

Enter the red-light filter to help reduce the colour and give us a better idea of the 'value' of the prints! (You can buy these at quilting stores, but, you know what? I made these with black cardboard and cellophane. So much cheaper and easier than getting myself to a quilting store.) As you can see, most of the fabrics are pretty distinct from each other. There are one or two that might cause problems but on the whole, they won't be so noticeable.

Next up is the nasty, picky part: sewing all these strip sets together...

I'm thinking of auctioning off the finished quilt for the Queensland floods. I mean, it'll be a month or two before it's actually finished, but still...

Also, presently putting together the red, white & blue rail fence. Pics to go up tomorrow.
Posted by Sel at 10:54 AM No comments:

All righty, so I've joined the ps.i quilt blog's quilt-along project for January - a postage stamp quilt. Which I'm slightly terrified of, because, whoa, all that sewing!

Still, there's no time like the present! I've chosen my fabrics - a mix-n-match of a number of jelly rolls I've had hanging around for a while and which were going to go into a log cabin quilt. Which I'm still doing, it's just going to take a bit more time!

Anyway, these are the fabric I've chosen to use from my stash: 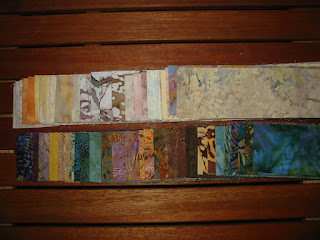 Right. Worked out how to post pics on Blogger. Most counterintuitive blogging interface I've yet worked with. Ugh.
Posted by Sel at 10:21 PM No comments:

Not sure how this blog will take to HTML: bold underline italic strikethrough

I'm thinking of using this blog for my 12 quilts in 2011. I don't know if I'll have time to detail the ongoing process of the quilting but...we'll see.

Seriously Enjoying Life
Posted by Sel at 2:40 PM No comments: